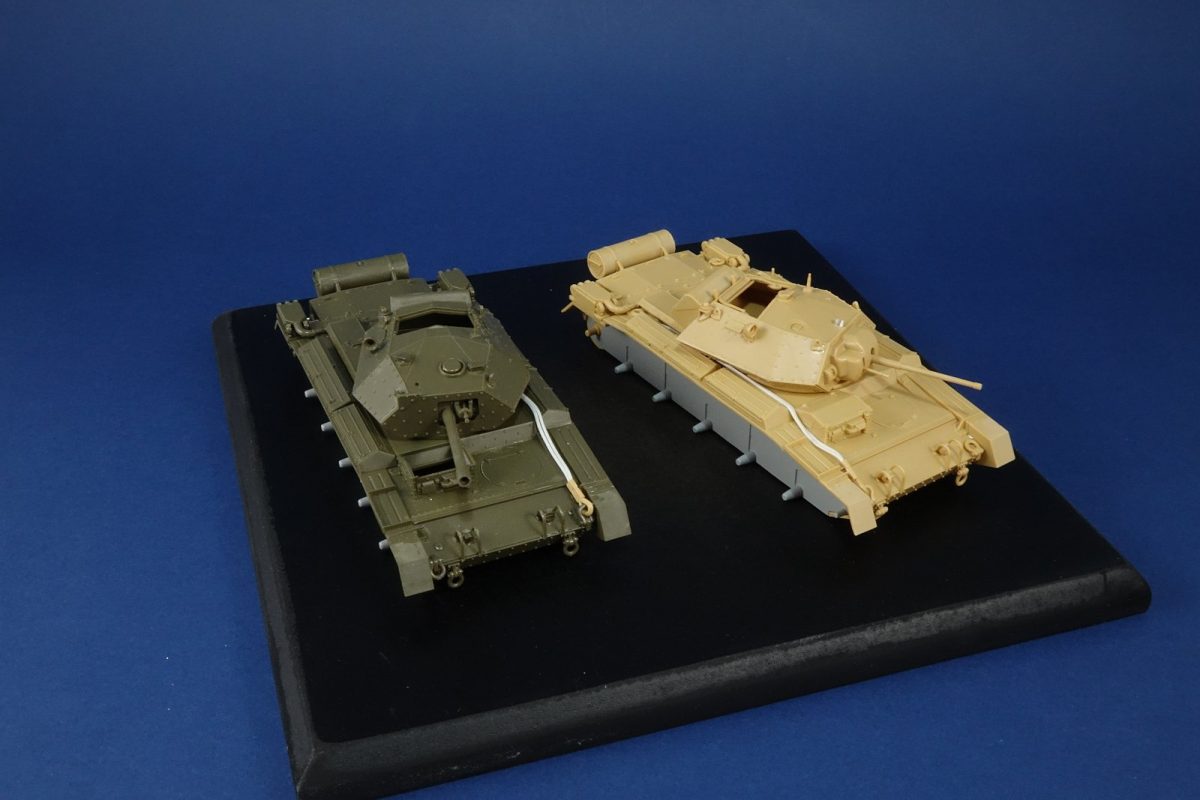 I feel I’m drowning in projects at the moment. I seem to have started five or six in the past two months and whilst I’ve finished the first one, the rest are cluttering up my workbench (and any available flat space adjacent to it). I usually have a couple of kits on the go but I know if I start too many, some of them will never get finished so I generally discipline myself to keep the numbers small.

It didn’t help that I’d bought several kits at Scale ModelWorld and I had the urge to start some of them whilst the enthusiasm was fresh in my head. I’ve always liked the Crusader as a tank but never spent much time building them. I think previously I’d only ever built a single example of the ancient Italeri 1/35 scale Crusader III but the Tamiya 1/48 scale Crusaders are lovely kits and I conceived the idea of building a II and a III side by side on the same base. This reflects the fact that both types were used alongside one another in the same units in the latter part of the North African campaign. A personal memoir by poet and writer Keith Douglas refers regularly to him having to swap between the different types as a Troop Leader, dependent on what tanks were available and what replacements they had received.

Douglas is regarded as one the finest soldier-poets of the Second World War and was killed in action a few days after D-Day as he was returning to his tank from a dismounted recce of enemy positions. His posthumously published memoir ‘Alamein to Zem Zem’ covered the time he spent in North Africa with the Sherwood Rangers Yeomanry. It is a colourful and personal view of his experience in the regiment and of  ‘fighting’ his tanks across the desert. As is often the case with my choice of modelling projects, I was inspired by the book to consider building a Crusader in Sherwood Rangers markings. Then I got ambitious and thought about doing a pair of them to illustrate the differences between the two. Then it made sense to put them both on the same base and so the project started to mushroom into something far more than I originally intended it to be.

The Tamiya kits offer suitable camouflage schemes for desert Crusaders and I decided on an overall Sand colour with a darker disruptive pattern. Tamiya would have you use a Black/Grey but contemporary records indicate it should be a dark green instead. Having taken the trouble to track the correct markings for a Sherwood Rangers Yeomanry vehicle of this period I then I realised that many photos of tanks in the late 1942/early 1943 period show that they carried virtually no unit markings at all, just the census number and Squadron/Troop markings on the turrets (and those only sometimes…).

This leaves a major dilemma for a model maker – do you go with the photographic evidence for accuracy and leave the tanks anonymous, or do you take the artistic route and add the unit markings to place the models in some form of context (otherwise they could belong to anyone).

Then of course there is the practical issue of building two tanks side by side. You are faced with having to do everything twice – two hulls, twice as many roadwheels, double the weathering and duplicates for the stowage, whilst remembering that each tank needs to be stowed differently so that they are individual. I’m at a stage where I’m having to paint up the rubber tyres on the roadwheels and my motivation is flagging. It’ll get done, but once it becomes a chore, my enthusiasm for the entire project starts to wane if I can’t find a renewed store of stamina.

As I mentioned earlier it doesn’t help that I also have other projects competing for my attention. I have a little Panzer 38(t) on the bench. 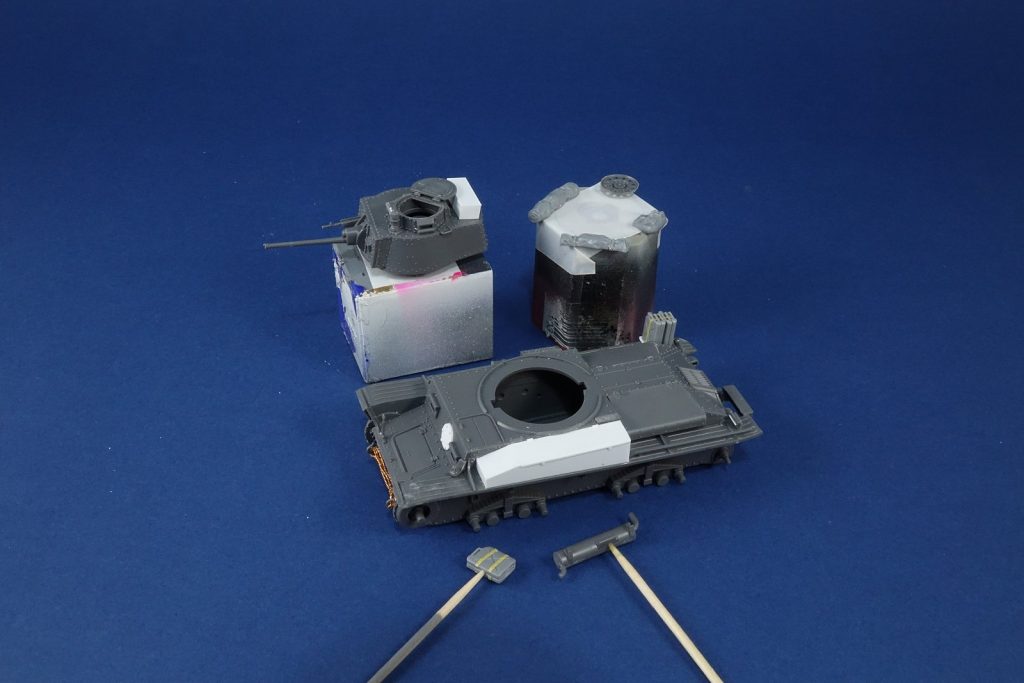 It’s an almost out of the box build that I foolishly started just before Christmas. There is a Toyota Hi-Lux ‘Technical’ to complete now that I finally have some parts I was waiting for, not to mention a complex Churchill conversion I’ve started tinkering with. 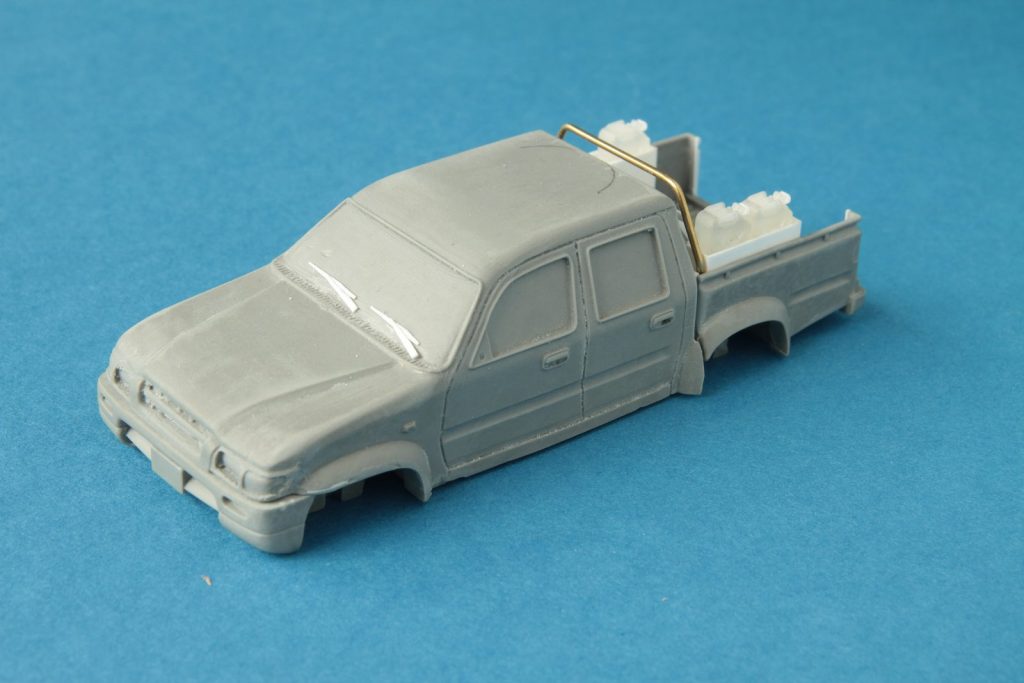 The Crusaders are holding my attention so I’m confident I will finish them in the next couple of weeks. I want to get them completed for my first show of the year. It’s always nice to have something new to put on the club display because it feels like I’m supporting the club, rather than just marking time with the same old exhibits.

The issue of what markings to add to them is however still playing on my mind because I’ve now realised that I could also complete the tanks as examples from the Staffordshire Yeomanry, who operated alongside the Sherwood Rangers in North Africa and who are my ‘home’ armoured regiment  – in fact if I leave off all the unit markings it would not only be historically more accurate but I could claim they belonged to either regiment, depending on my mood (but that seems to be cheating a bit).